The Japanese sense of aesthetics is a fine combination of the awareness about the impermanence of things on one hand and appreciation of the inherent beauty of the moment on the other hand. The emphasis on the element of transience or the changing nature of things in Japanese culture and art comes from not only the influence of Budhism, but also from the furies of nature that devastates various regions of Japan from time to time in the form of earthquakes.

However, one must take delight in ‘beauty’ in spite of its impermanence. In fact it is the impermanence that should provide the urgency to appreciate life. The Cherry Blossoms, which is one of the greatest fascinations for the Japanese, flower just about a week in a year. They have a term to describe such delight which has an underlying tinge of sadness about its passing – Mono no aware. 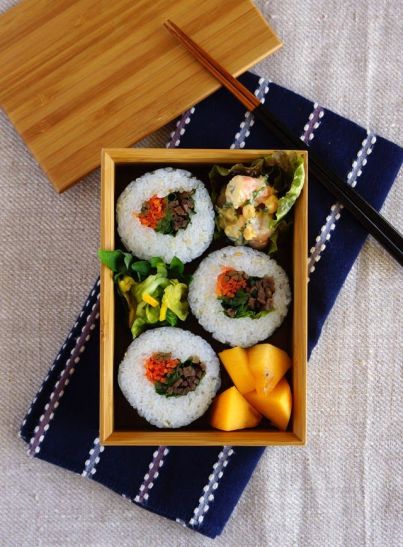 Master chefs take great care to decorate food and to some extent take care in the choice of cutlery. But would they take care of the aesthetics when it comes to sending packed lunch? Well the Japansese do, whether it is food from a hotel or home cooked food. They take care not only of the art of the lunch box but also of the colour and arrangement of the food items inside the box called a Bento Box. There are also various types of traditional and modern styles of arrangement of food inside the box, one popular style being called kyaraben which is the arrangement of food in such  manner as to look like cartoon characters.

If great care is taken to bring in aesthetics into the art of taking food that includes the elaborate tea ceremonies, the complementary part of eating is not neglected. The traditional Japanese toilet is located away from the main building in a grove fragrant with leaves and moss to be in close proximity with nature. Unlike the modern toilets, the interiors of those toilets are not made glossy.

The traditional Japanese toilet is one example of Sabi which is associated with something that has aged and rusty. Things that have aged well and are rusty, desolate, and  tranquil have a beauty of their own. The following poem brings in its spirit the best:

Solitary now —
Standing amidst the blossoms
Is a cypress tree.

Japanese writer Tanizaki captures the essence of Wabi when he describes the beauty of a traditional tea house in his essay, ‘In Praise of Shadows’ :

An empty space is marked off with plain wood and plain walls, so that the light drawn into it forms dim shadows within emptiness. There is nothing more. And yet, when we gaze into the darkness that gathers behind the crossbeam, around the flower vase, beneath the shelves, though we know perfectly well it is mere shadow, we are overcome with the feeling that in this small corner of the atmosphere there reigns complete and utter silence; that here in the darkness immutable tranquility holds sway.

(The second and last installment of free promotion of my book IDLE HOURS will be from 12 to 13 Dec 17. Please download it if you haven’t already done so. I will be glad if you could put your reviews on my Amazon and Goodreads pages.)

11 thoughts on “Part-2: The Japanese sense of Aesthetics”